NASHVILLE, Tennessee – When I got an email about Laci Kaye Booth’s newest release, “Shuffle,” I also noticed that she was named to CMT’s Next Women of Country Class of 2022.

Seeing as I had already featured four other ladies from this prestigious group, I was eager to interview this American Idol alum as well. I often promote female singer/songwriters, and this set of women are very near and dear to my heart. 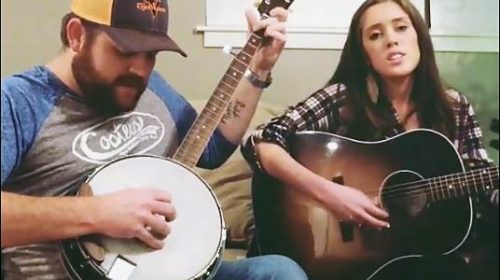 The Houston native started singing at the age of 3 “around the house” and in church. During her Idol audition, she revealed that being a contestant on this show has been her dream since she was 7 years old. While Laci Kaye Booth is starting to become a household name, some may be familiar with her dad, Texan country singer Jody Booth, who greatly influenced her decision to pursue music full-time. Her mother and aunt sing as well.

“I don’t really remember a time when singing and performing wasn’t the focal point of my whole life,” she said.

She learned the guitar, and by her teen years she was well on her way to becoming a country singer. She would play any fundraiser or event that would have her. Her first gig was outside of her hometown tanning salon, where she played on Halloween.

Even during college she would play shows on the weekend – restaurants or bars that would have her, and she made herself “a little spending money.”

“It was always my dream to move to Nashville, but my parents wanted me to finish my degree first. I was 30 hours away from a bachelor’s degree in biology when I tried out for American Idol,” Booth revealed.

The songstress’ list of her named influences is the most diverse set of artists that I have ever seen. You can hear echoes of her country influences ranging from Merle Haggard to the Chicks and Shania Twain, along with the stylings of Norah Jones and Fleetwood Mac’s Stevie Nicks, on her self-titled album.

Booth wowed the Idol judges with her unique rendition of Haggard’s “Mama Tried.” She stopped the show with her cover of Journey’s “Open Arms.”

American Idol guest host Bobby Bones picked Miranda Lambert’s “The House That Built Me” for Booth as she entered the Top 5 because, as he said, “This song was her story.”

While ultimately she was not chosen as the winner, the exposure from being on the national singing competition fueled her desire to truly become a country singer.

Even with all the pop influences, Booth states she was always just “naturally country.” She could not get away from it.

The summer following Idol, she came to Nashville for the first time to see what it was about, writing songs for two weeks before returning home.

The Texas native told her mom, “I’m moving to Nashville.” And in September of 2019, she did.

She met with Big Machine Label Group (BMLG) in January 2020 and they wanted to sign her that night. But in March 2020, the pandemic hit, so the singer did not end up signing to the label until August of 2020.

Booth is also a gifted songwriter. She wrote her first song at age 9 and really got into songwriting in her teens. Quickly proving herself in the Music City’s songwriter community, she’s worked with such hitmaking artists, writers, and producers as Nathan Chapman, James Slater, Charles Kelley, Sam Ellis, Laura Veltz, Jimmy Robbins, and Liz Rose.

She was fortunate to have renowned producer Dann Huff work on her self-titled record. She even got to write and sing a duet with Charles Kelley – “Broken Heart Still Beats” – eight years after first seeing him as an fan in the audience at one of his concerts.

“It was really cool getting to sit in the room with him and see how he really works. I was in awe,” she recalled.

Her raspy yet velvety alto voice normally lends itself to quiet, serious songs, but the cleverly written “Shuffle” was created to bring out Booth’s more playful side.

“My wheelhouse, what I truly and naturally write, are the sad, ballad, breakup emotional songs,” Booth explained. It was a struggle for her, she said, to sing or write uptempo songs.

When she wrote “Shuffle,” she wanted to create a lively song that would get people on their feet.

With lyrics like (I can go from) I’ll always love you and you’re still the one to / Before he cheats and ready to run / I’m In love with the boy / but this one’s for the girls / Between stand by your man and goodbye Earl / My country playlist is real persuasive / Boy, you’re in trouble / My heart’s on shuffle, babe, any self-professed country fan will recognize the references to many of their favorite songs.

“I thought you had to have big-power vocals like Carrie Underwood or Martina McBride to make it,” she confessed. “But when I heard [softer vocalists such as] Stevie Nicks and Norah Jones, I became infatuated because I realized my voice could do something similar.”

And while we appreciate the big voices in country music, if everyone sounded the same, it would become boring. Booth’s smooth, soulful vocals have a unique quality that help her stand apart in the growing sea of talented artists.

Another song on her record is the somber “Heart of Texas,” which pays homage to lost love in the Lone Star State. She stays true to her stylistic roots with dreamy melodies and vocals.

“This song was the north star of the entire project because it was one of the first songs I wrote once I moved to Nashville. I just fell in love with it.” If all goes as planned, Booth will be singing in England and Canada. But she is very excited to sing at the most famous country festival outside of Nashville, Stagecoach, in April. Like the CMA Fest, Stagecoach was postponed for two years.

“I can’t believe that it is finally getting to happen and that I am still on the lineup. It’s crazy to me and I feel very, very blessed.”

Her identifiable voice in country music makes you turn the volume up, because you’ve simply never heard anything like her before. Forbes magazine noted that “something that set Booth apart on Idol, and sets her apart from many other popular country women, is her hushed, lulling vocal quality.”

For this very reason, I will be keeping a close eye –and ear – to see what this country maven does next.