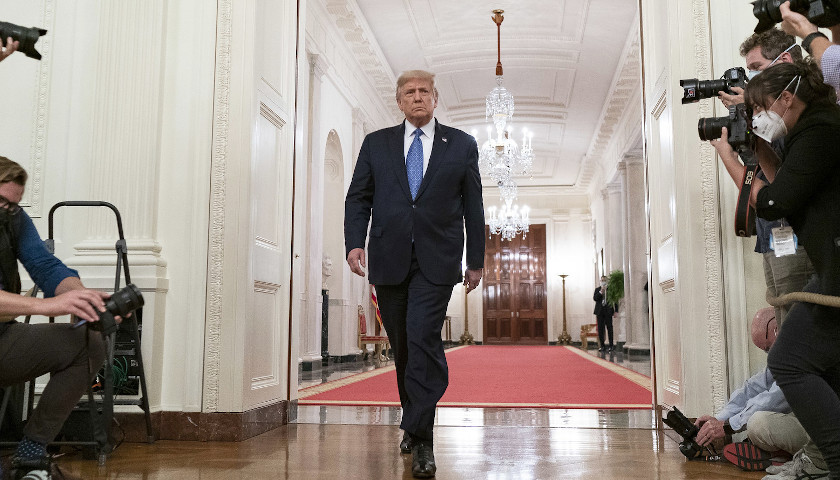 I’ve written many times that I thought Donald Trump would win the 2020 election. The question always was whether he would win it beyond the margin of fraud and litigation.

Did he? It’s touch and go. Television networks and even some foreign heads of state tell us Joe Biden won the election. The electors have yet to be appointed and meet to vote. Still, the forces arrayed against Trump are formidable. It’s not just, as Joe Biden bragged, that the Democrats had put together “the most extensive and inclusive voter fraud organization in the history of American politics.” That does appear to have been the case.

But if Donald Trump loses, it won’t only be because of that “extensive and inclusive” organization. Perhaps more important is the ambient jelly in which that organization has operated. I mean the eructations of the swamp, or to give it a more cinematic name, “The Empire.” 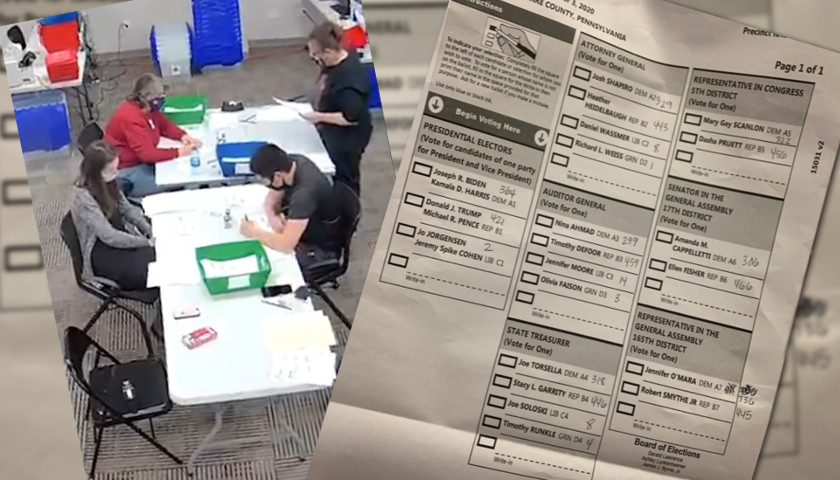 A poll worker who checked in voters at the Radnor Municipal Building located in Delaware County, Pennsylvania’s Sixth Ward – about 13 miles outside of Philadelphia – said Tuesday was “total chaos.”

The worker, who we will call Sue (to protect her identity and safety), said that she worked the greater Philly area polling precinct in 2016 and never saw what she witnessed in droves on election day 2020.

People were angry, according to the election volunteer. 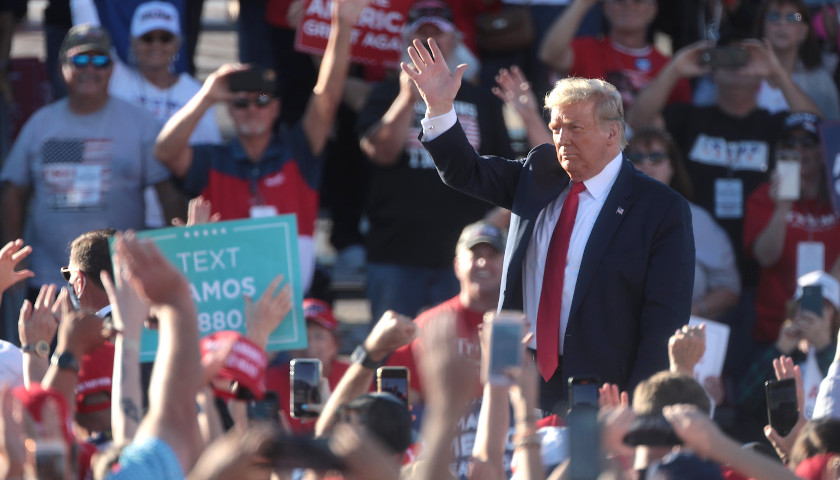 The states of Arizona, Nevada and Pennsylvania are still counting ballots, and the presidential election of 2020 between the President and former Vice President Joe Biden is still too close to call.

Win or lose in 2020, President Donald Trump, his administration, campaign and supporters have a whole lot to be proud of. This is a President who has fought tirelessly for the American people: to get better deals on trade, to take on the Washington, D.C. establishment, bring jobs back to the U.S. and get the economy moving after eight years of the Obama-Biden stagnation. 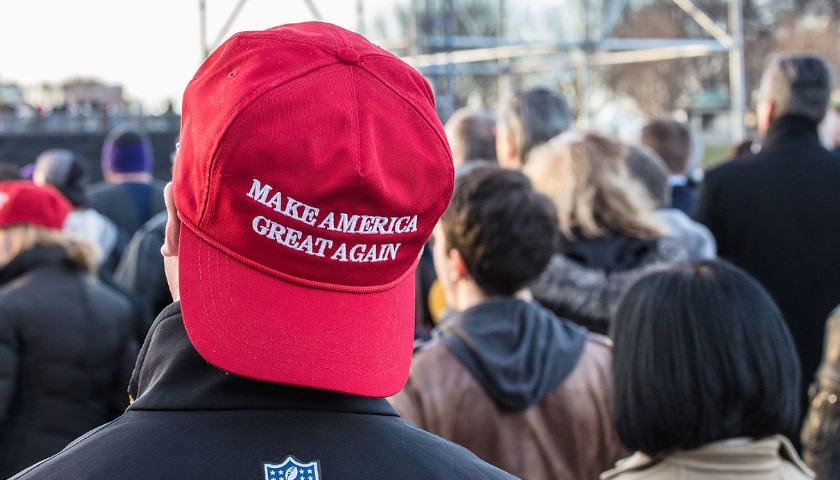 A Pennsylvania high school student who claims she was sent home for wearing pro-Trump clothing filed a lawsuit against her school district in Federal court on Tuesday, accusing the district of violating her free speech rights, PennLive reported.

On October 1, the school district issued a new policy on clothing which banned students from wearing anything that contained political messaging.

Two Delaware women have been indicted on hate-crime and theft charges related to a MAGA cap being taken outside a Democratic National Convention event in Wilmington. 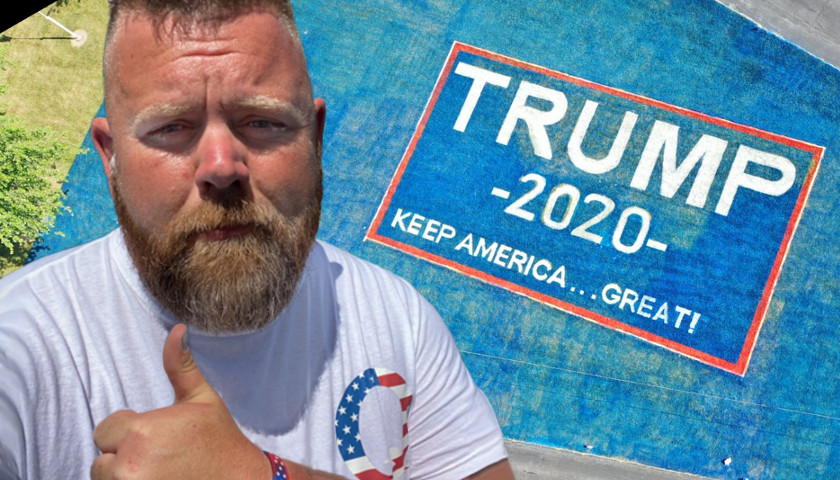 J.R. Majewski, an Air Force veteran, said his 19,000-square-foot lawn is now home to one of the world’s largest Trump flags. 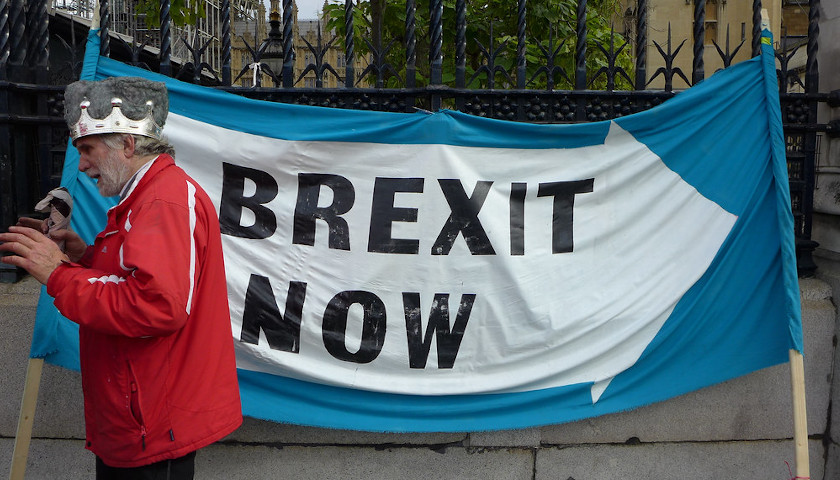 The Conservative Party won big in Great Britain’s parliamentary elections last week, prompting many analysts to wonder how it happened. The popular observation is that the Conservatives won due to Jeremy Corbyn, the controversial leader of the Labour Party. Corbyn’s associations with the IRA, Palestinian terrorists, Communist guerrilas, and anti-Semites didnt endear him to many voters. But too many conservatives think Corbyn’s controversial record, particularly the anti-Semitic accusations, is what decided the election. 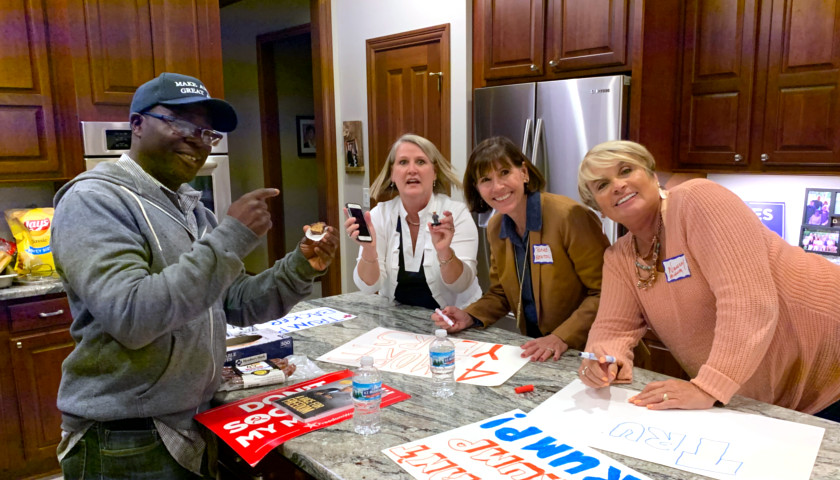 MAGA meetups popped up around central Ohio Monday night as supporters of President Donald Trump gathered to make signs for the protest rally and talk about all things Trump the night before the Democratic Presidential Candidates converge on Westerville’s Otterbein Campus. 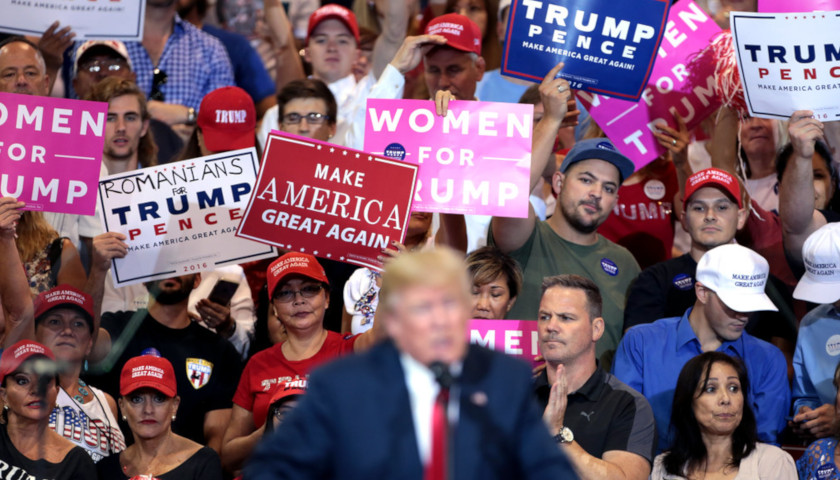 The claim from some Democrats that President Trump’s rallies have sparked a surge in hate crimes has been debunked, according to a study by the Reason Foundation. 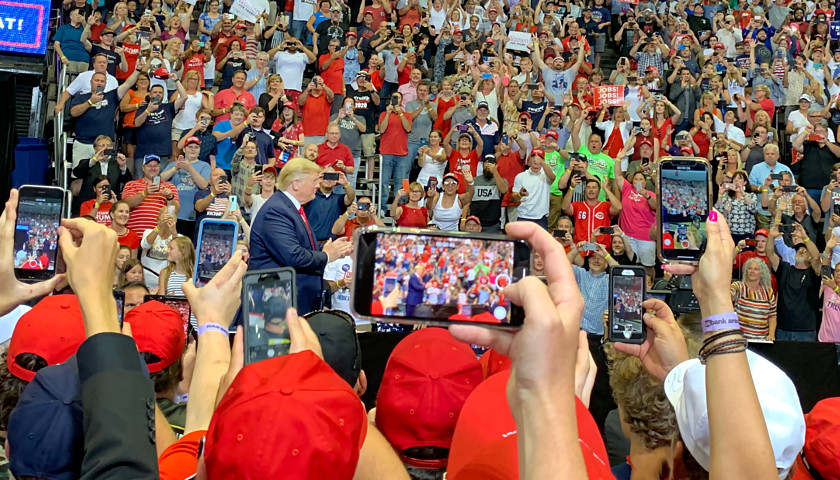 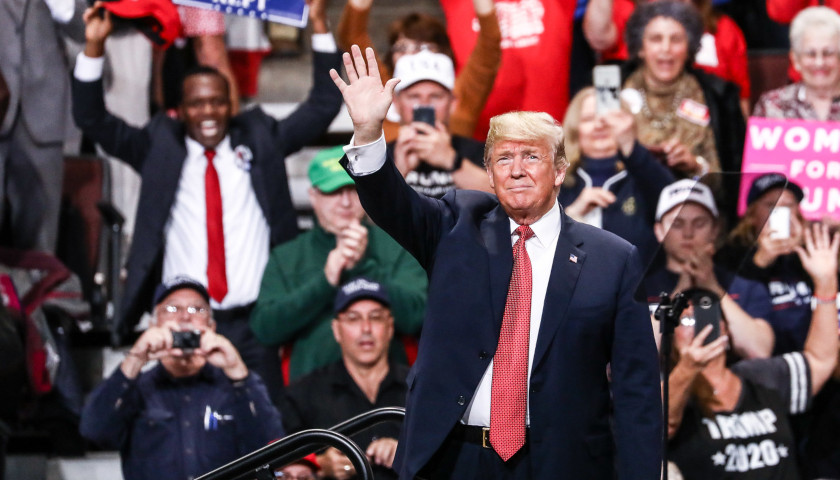 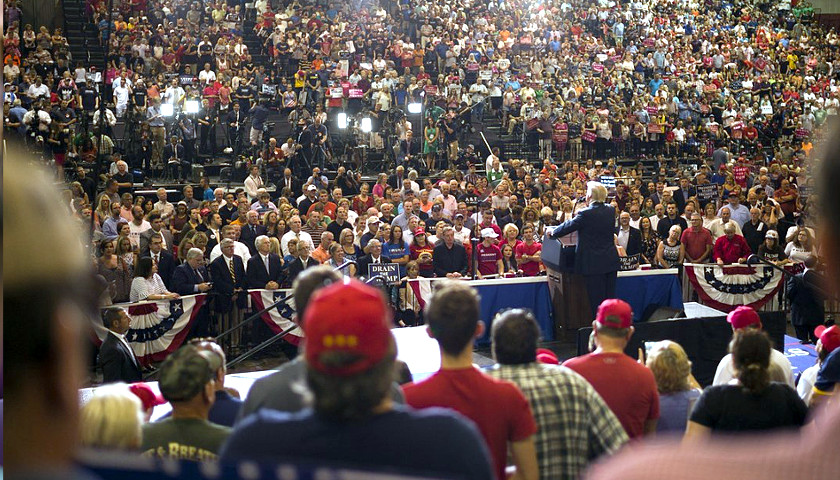 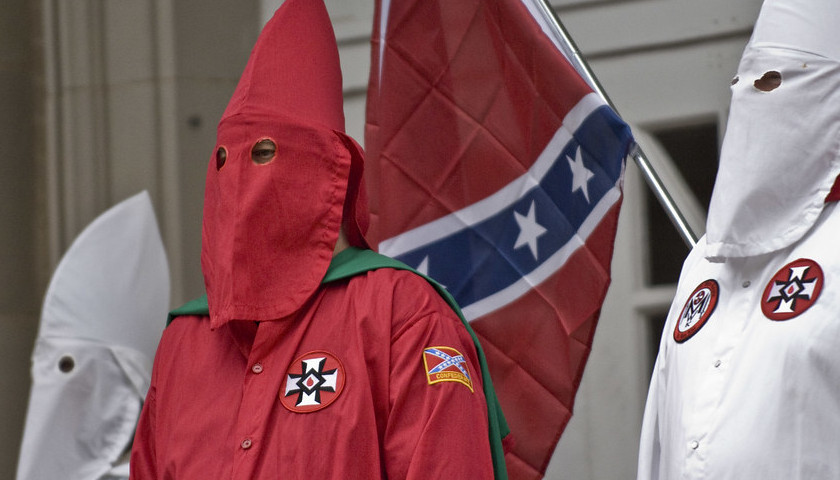 by Julie Kelly   They are everywhere. I am talking, of course, about white supremacists. The news media, Democrats, and NeverTrump Republicans would have us believe the country is under siege by a sinister cabal of Americans who want to return to the days of Jim Crow, or better yet,… 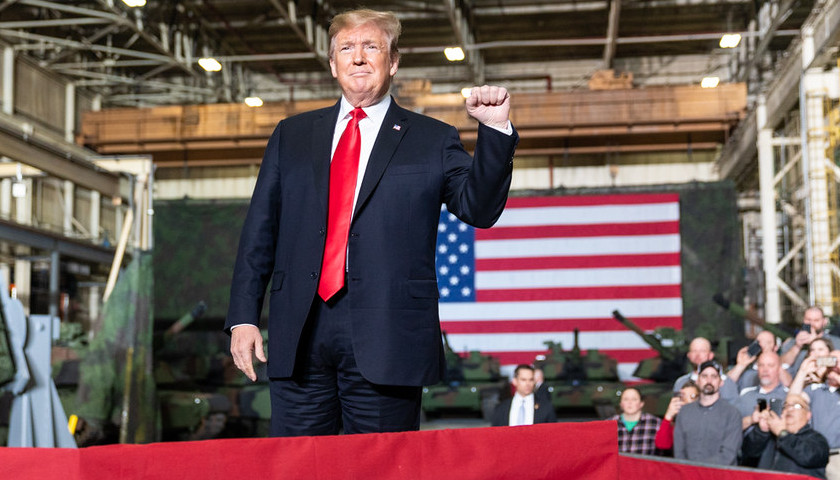 A new poll shows that nearly 60 percent of Ohio voters support the proposals outlined in President Donald Trump’s new immigration plan. At the end of May, Trump delivered a speech in the Rose Garden where he unveiled his administration’s new plan to tackle illegal immigration. In response, the… 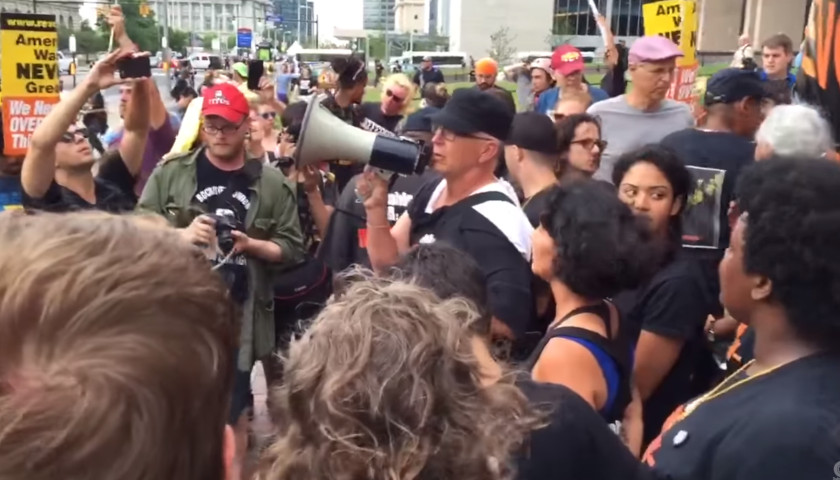 Cleveland has agreed to pay $225,000 in a settlement with a second protester who was arrested outside of the 2016 Republican National Convention for burning the American flag. As The Ohio Star reported in April, the city agreed to a $50,000 settlement with Steven Fridley, who was also arrested… 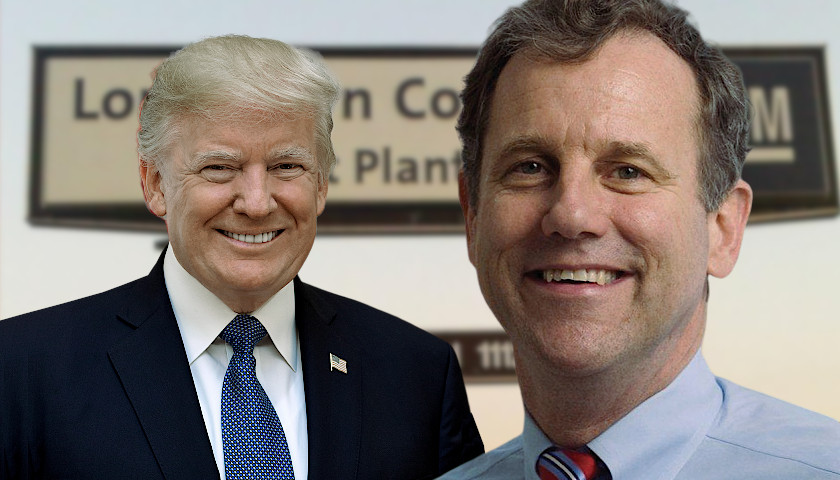 Sen. Sherrod Brown slammed President Donald Trump Wednesday during a speech on the Senate floor in response to Falcon Transport’s announcement that it would be closing its door. The company, which serviced Lordstown’s General Motors plant, told its workers in an email Saturday that it was “not able to… 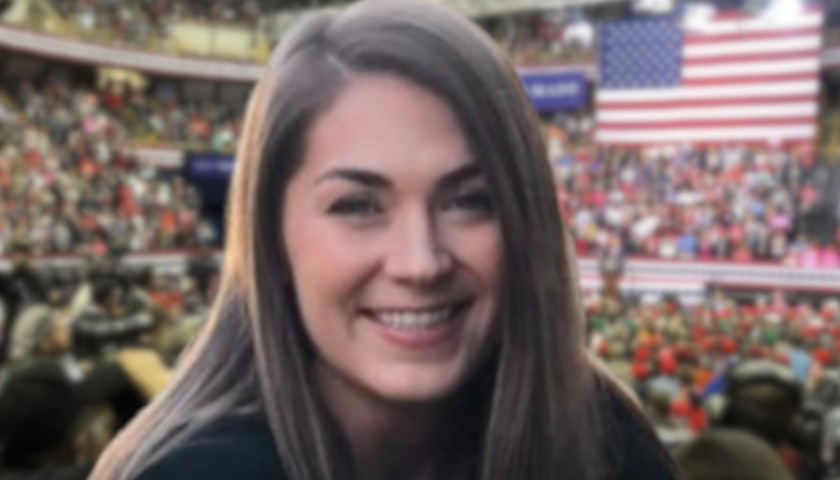 An editor for a Wisconsin-based publication was outed Tuesday for allegedly telling a female communications director for the National Republican Congressional Committee that she hopes she doesn’t “get raped at a MAGA rally.” In a press release, Carly Atchison advocated for the Born Alive Survivors’ Protection Act, which would protect… 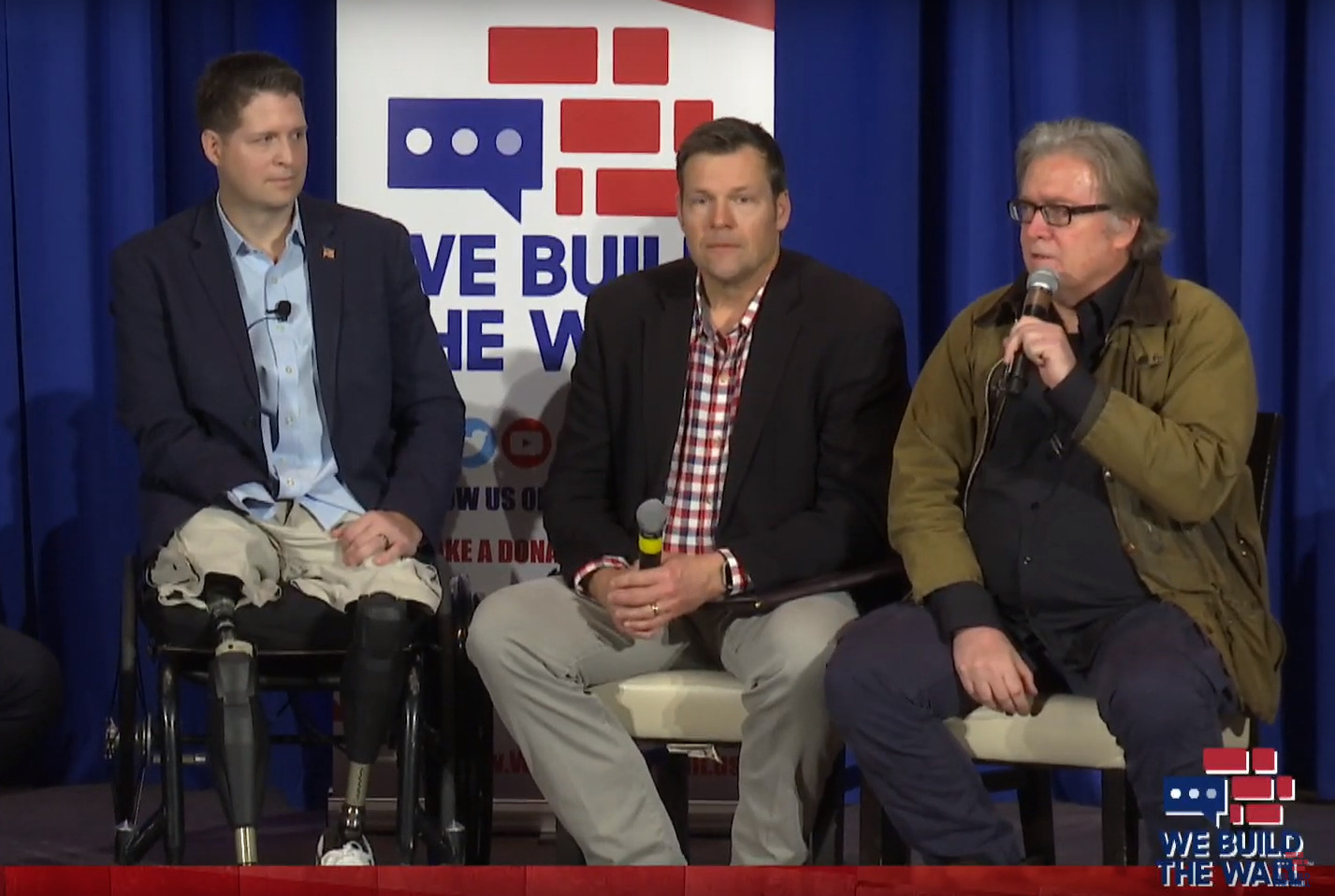 We Build the Wall, Inc. is hitting the road for Detroit Thursday night. The Ohio Star was there for We Build the Wall, Inc.’s stop Tuesday night in Cincinnati, which featured panelists such as former White House strategist Steve Bannon, Sheriff David Clarke, and former Kansas Secretary of State Kris Kobach.… 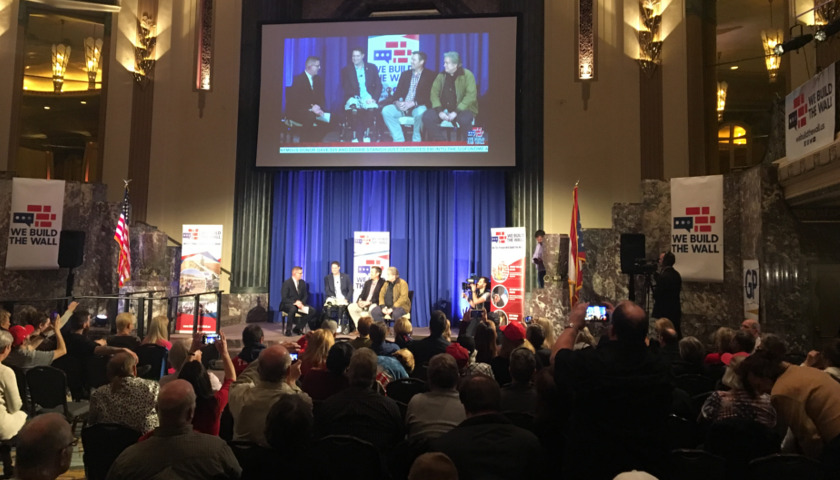 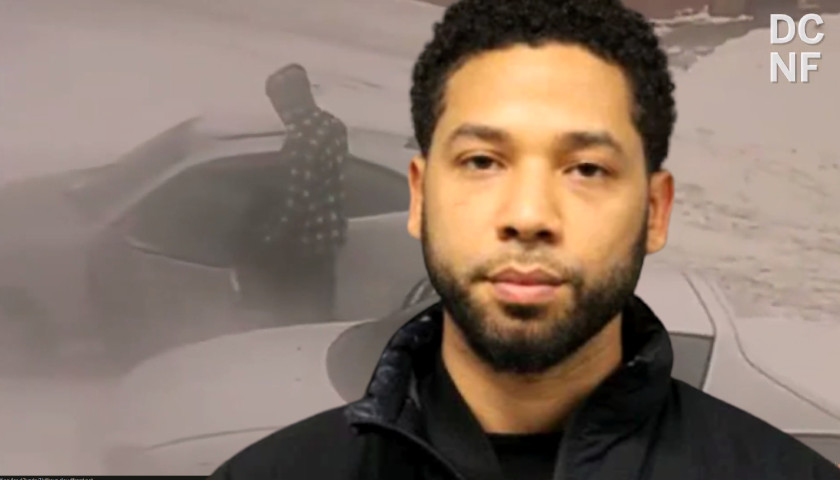 by Molly Prince   “Empire” actor Jussie Smollett turned himself into police custody after he was charged on allegations related to disorderly conduct for filing a false police report, police said Thursday. “Press Briefing: Jussie Smollet is under arrest and in custody of detectives,” tweeted Anthony Guglielmi, chief communications officer… 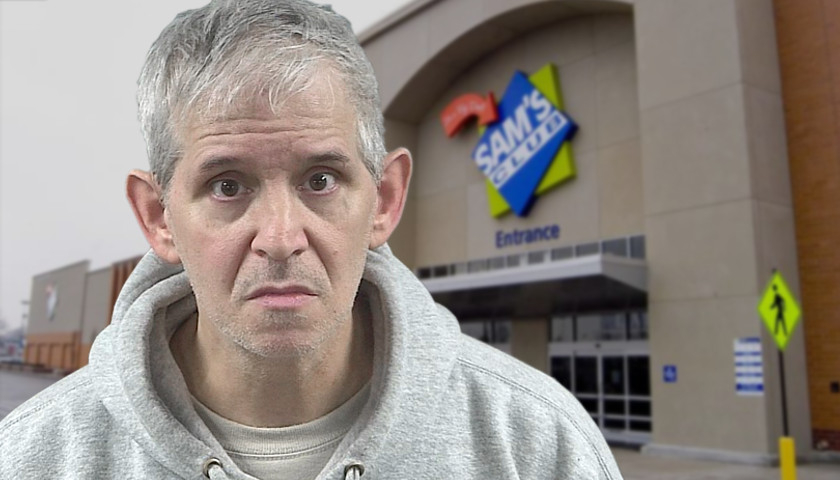 by Andrew Kerr   A Tennessee man faces a charge of first-degree wanton endangerment after allegedly pulling a gun on a Sam’s Club customer in Kentucky for wearing a Make America Great Again hat. James Phillips, 57 (pictured above), told police he made an obscene gesture with his finger towards… 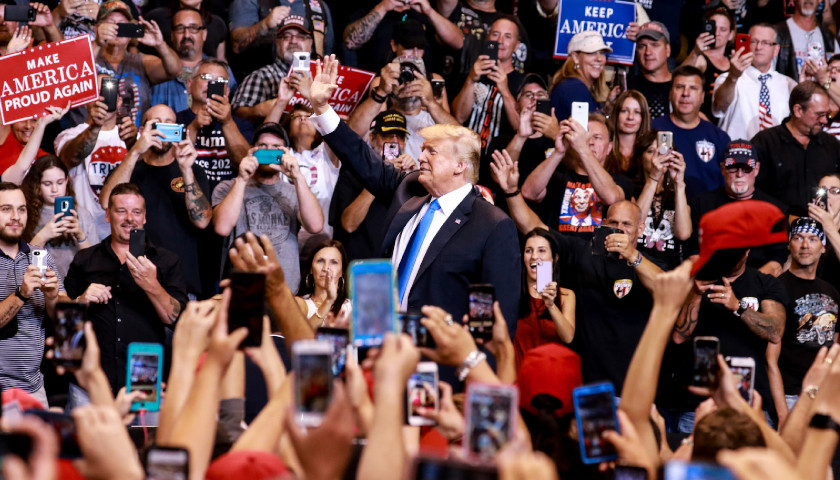 President Donald Trump’s reelection campaign announced Wednesday that it will be holding its first rally of 2019 in El Paso, Texas on February 11. According to the Trump campaign, the rally will mark the president’s first in El Paso and seventh in the state of Texas. “We are please to… 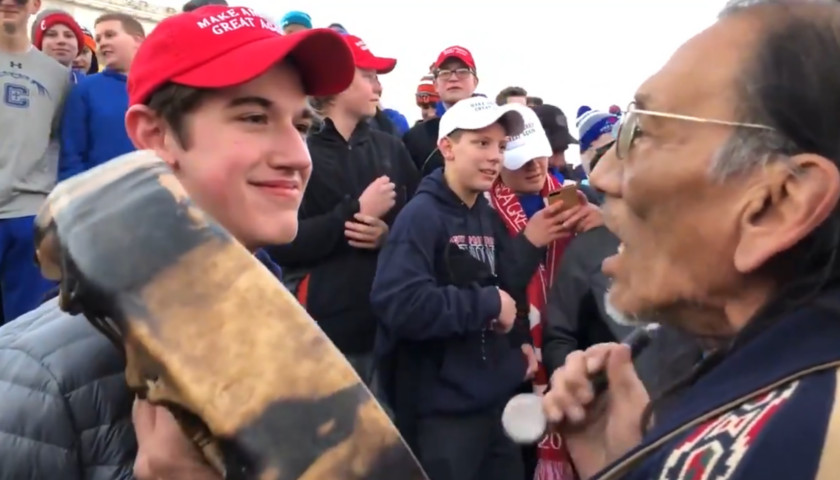 by Neetu Chandak   House Budget Committee Chairman John Yarmuth called for banning teens from wearing Make America Great Again (MAGA) hats after a video circulated on social media of an encounter between some Kentucky high school boys and an American Indian group after the March for Life rally Friday.… 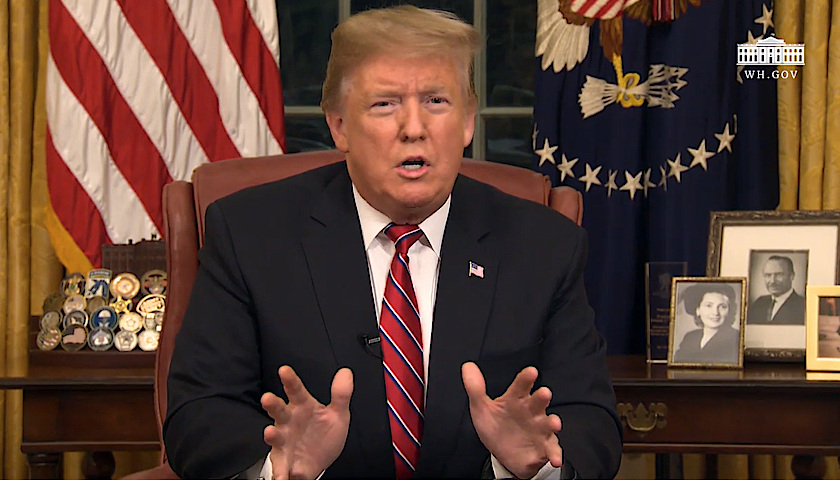 In a highly anticipated prime-time event, President Donald Trump delivered his first Oval Office address Tuesday night to discuss the continued battle over funding for his border wall. “This is just common sense. The border wall would very quickly pay for itself. The cost of illegal drugs exceeds $500 billion… 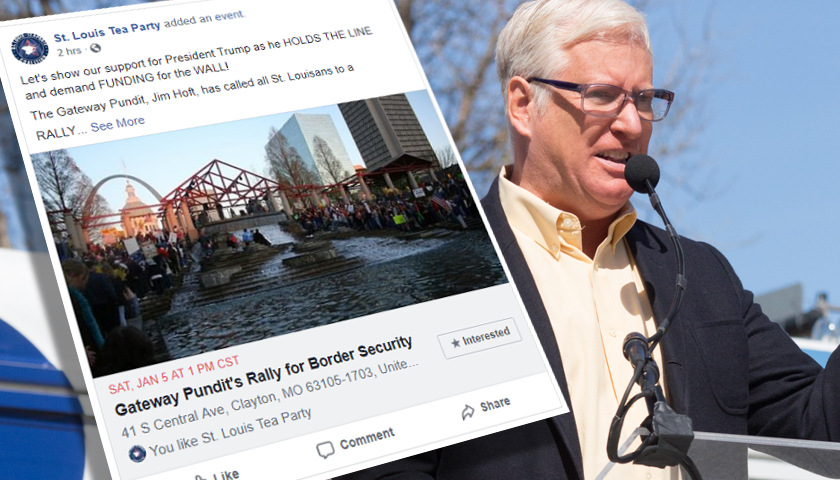 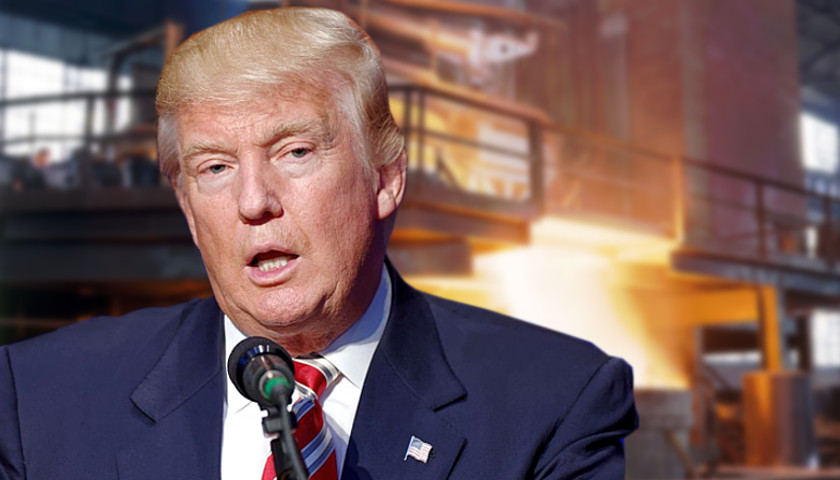 One of the highlights of President Trump’s Make America Great Again rally in Lebanon, Ohio, Friday night was the news on jobs, and particularly manufacturing jobs. For a rust-belt state like Ohio, the Trump administration’s two-year focus on fair trade and deregulation has helped both the steel and coal industries.… 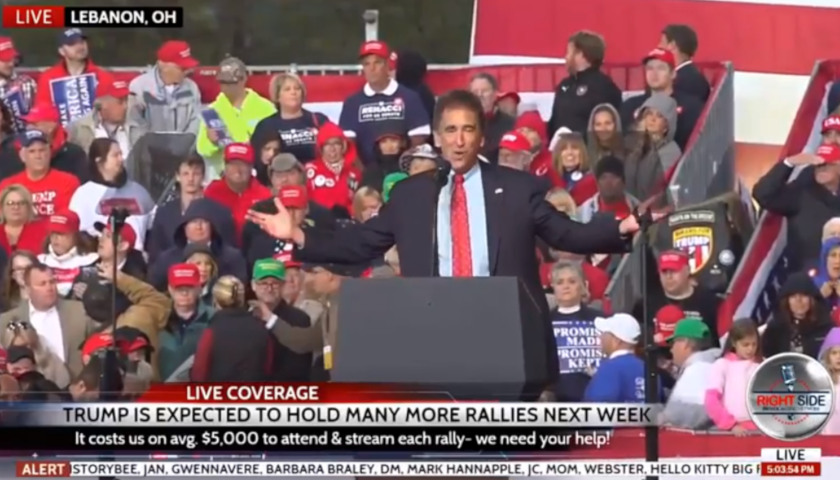 Lost amid the Trumpmania at Friday night’s “Make America Great Again” rally in Lebanon, Ohio, was a rousing speech by the GOP candidate for U.S. Senate — Congressman Jim Renacci. Usually when a candidate gets up to speak during a Trump rally, it’s difficult for him or her to maintain… 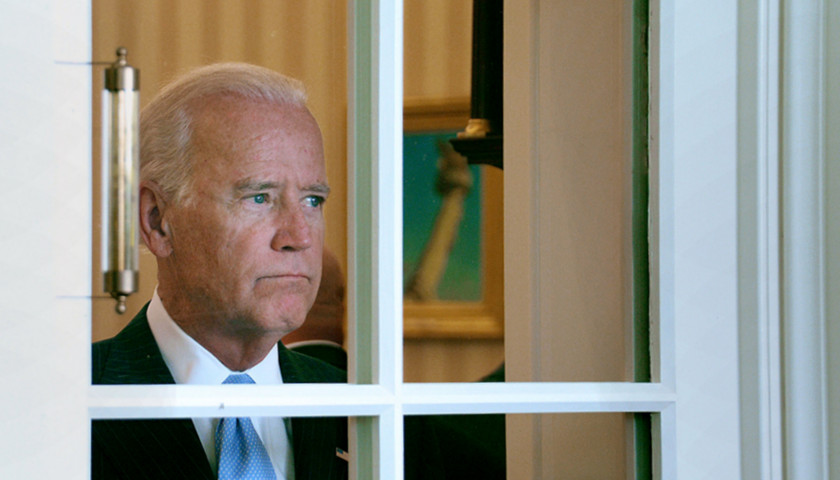 by Jeffery Rendall   “But Barack, I want to run, I need to run…” The words hung in the air as Joe Biden clung to the edge of his chair in the Oval Office in late 2015. The vice president fiddled nervously waiting a response from the president, a normally impatient man who’d just spent… 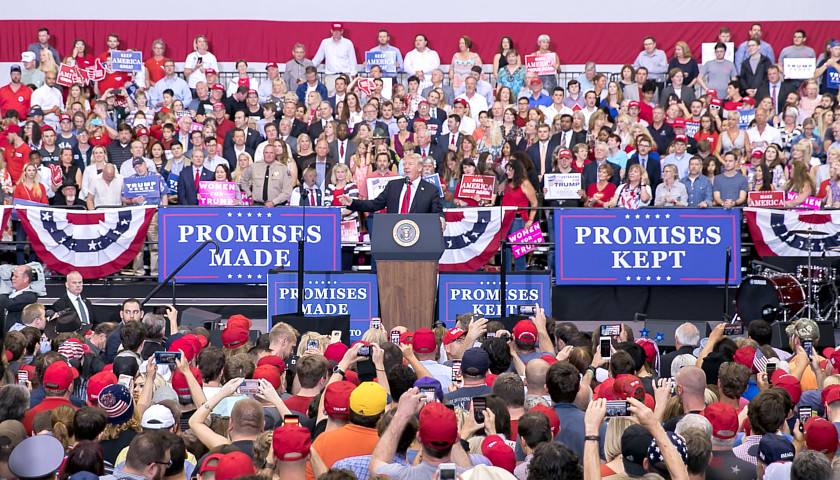 NASHVILLE, Tennessee–President Trump visited Nashville Tuesday to show his enthusiastic support of Representative Marsha Blackburn (R-TN-07), who is running to replace retiring Senator Bob Corker. Republicans and Democrats seem to have settled on their candidates, with both Republican Blackburn and her presumed opponent, Democrat Phil Bredesen running alone in their…