Among those joining the leaders on the U.S. side were Secretary of State Mike Pompeo, White House chief of staff John Kelly and national security adviser John Bolton. The North Korean delegation included Kim Yong Chol, a top aide to Kim Jong Un who recently met Trump at the White House. 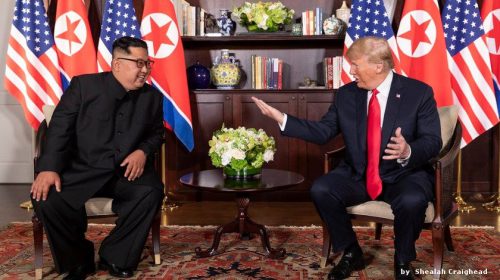 Early,Trump said a one-on-one meeting withKim was “very, very good,” and he spoke of having an “excellent relationship” as they held talks Tuesday in Singapore about the possible denuclearization of the Korean Peninsula.

After about 40 minutes alone, except for interpreters, Trump and Kim each brought a small delegation of officials for more extensive talks.

“We will solve a big problem,” Trump said ahead of the main talks.

Tuesday’s unprecedented first meeting of a sitting U.S. president and a North Korean leader began with Trump and Kim coming together in front of a background of U.S. and North Korean flags as dozens of cameras snapped photos.

The two men then sat side by side before beginning their solo talks with Trump predicting a “great discussion.”

“We’re going to be tremendously successful and it’s my honor, and we will have a terrific relationship, I have no doubt,” Trump said.

Kim said through an interpreter that it was “not easy to get here” and that “old prejudices and practices worked as obstacles on our way forward, but we overcame all of them and we are here today.” 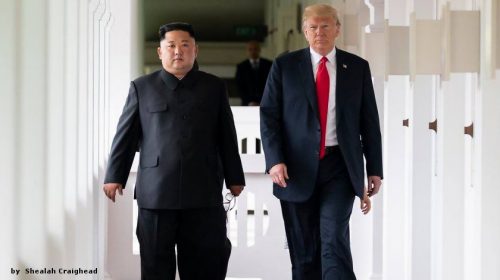 The White House announced Monday that Trump would leave Singapore Tuesday night after meeting with Kim, adding that talks between U.S. and North Korean officials “are ongoing and have moved more quickly than expected.”

Trump is scheduled to address the media before flying out of Singapore. Previous reports had suggested Trump would leave Wednesday.

On the eve of the first encounter between a sitting U.S. president and a leader of North Korea, American officials are maintaining that any resulting agreement must lead to an end of North Korea’s nuclear weapons and ballistic missile threats.

There will not be a repeat of “flimsy agreements” made between previous U.S. administrations and North Korea, Secretary Pompeo told reporters in Singapore on Monday.

“The ultimate objective we seek from diplomacy with North Korea has not changed — the complete, verifiable and irreversible denuclearization of the Korea Peninsula is only outcome that the United States will accept,” Pompeo said.

“If diplomacy does not move in the right direction, those measures will increase,” he said.

Pompeo said he was “very optimistic” the meeting Tuesday between Trump and Kim would “have a successful outcome.”

He declined, however, to reveal any details of the preliminary discussionsheld Monday between U.S. and North Korean officials.

Pompeo did say the United States is “prepared to take what will be security assurances that are different, unique that America has been willing to provide previously. That’s necessary and appropriate.”

But when pressed by reporters, the secretary of state would not say whetherthat could include reduction of the number of or removal of U.S. troops in South Korea.

It is also unclear whether U.S. officials will raise human rights issues in meetings with the North Koreans. Ahead of his trip, President Trump said “every issue will be raised.” But he did not address human rights issues when he met with Kim’s top aide, Kim Yong-cho. Critics say ignoring the issue risks squandering leverage and abandoning the North’s victims.

Trump attended a working lunch Monday hosted by Singapore’s prime minister, Lee Hsien Loong, at the Istana, which is the official residence of the city state’s president.

“We have a very interesting meeting in particular tomorrow, and I think things can work out very nicely,” Trump told Lee. “We appreciate your hospitality and professionalism and your friendship.” 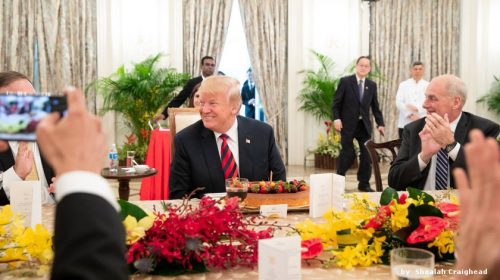 Trump was presented with a birthday cake by his Singaporean host.The U.S. president turns 72 on June 14.

Trump also spoke by telephone Monday with South Korean President Moon Jae-in, according to officials in Seoul who predicted that if Tuesday’s Singapore summit is a success it would be a “gift” to the entire world.

“President Moon and President Trump agreed Trump and Kim will be able to make a great achievement if the two leaders come together to find a common denominator through frank discussions,” Blue House spokesman Kim Eu-kyeom told reporters.

The spokesman said Trump told Moon he would send Pompeo to Seoul immediately after the summit to explain its outcome.

About 5,000 journalists are in Singapore for the occasion, but only a handful of American and North Korean reporters and photographers were permitted at the venue when the two leaders greeted each other.

Bill Gallo contributed to this report .