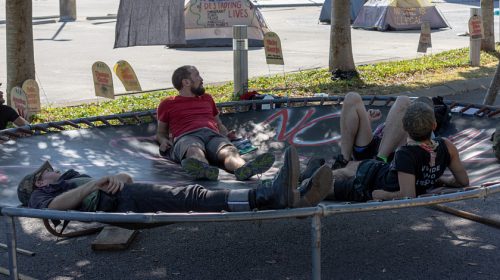 CoreCivic has contracts with the U.S. Immigration and Customs Enforcement, the Nashville Scene said.

Jeannie Alexander of the No Exceptions Prison Collective, told the Scene that the group is protesting in solidarity with others occupying ICE offices across the country.

“But what’s unique about Nashville is that we’re the only city in the United States that has the headquarters of CoreCivic,” Alexander told the Scene. “ICE is their biggest customer. And the way the prison industrial complex continues to grow and [what makes] targeting immigrant families so much easier is that corporations like CoreCivic are building internment camps and they’re profiting off of it.”

While Alexander’s group spent its time protesting, Nashville’s police force spent its resources protecting the public and endangering officers in the extreme weather. 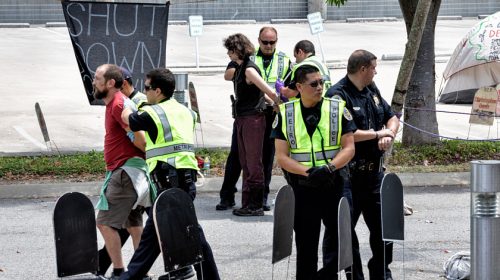 More than 70 officers and 18 supervisors were pulled from their regular duties protecting Nashville’s neighborhoods, the police department said. After numerous warnings to leave were ignored, officers arrested nine people who refused to leave or reentered the property. Officers then spent four hours in extreme heat, 95 degrees with a heat index of 102, removing the remaining 10, who had encased their chains in steel and concrete.

At 2:15 p.m. today, there were 62 calls for non-emergency police service pending due to the anti-ICE protest.

U.S. Senate candidate Phil Bredesen is a former mayor of Nashville as well as a former Tennessee governor. His leadership has been missing since the anti-ICE protests early Monday morning, as his campaign website and Twitter page bear no mention of the public safety concern. 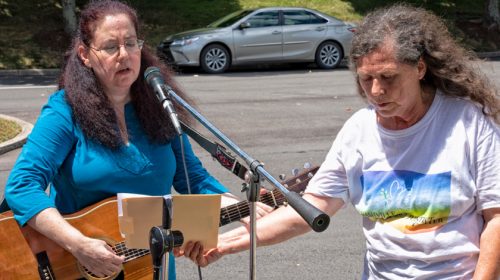 “We understand the need of the people to engage in protest. We understand the right of the people to engage in protest,” Anderson said. “I think that all of Nashville knows that over the years we have taken all reasonable steps to facilitate and accommodate those views and those rights as people have engaged in protests.  However, today’s actions, by a handful of persons, can only be interpreted as a deliberate and calculated measure to impact public safety and to unreasonably expend public resources. These actions, by a few, go far beyond any need to or right to express a point of view. At any future sentencing for these illegal acts, there should be corresponding and commensurate consequences.”

Bredesen has not been quiet during his campaign about illegal immigration.

The Tennessee Journal’s On the Hill quoted Bredesen in May as denouncing ICE’s separation of families who illegally crossed the border: “At our border with Mexico, our country is taking terrified little children from their parents and incarcerating them in camps behind chain link fences,” he said in a statement. “The whole process is secret—the press has been prevented from doing their job. Any normal American is horrified.”

The Chattanooga Times Free Press in July asked Bredesen if he would support his party’s efforts to dismantle ICE, The Tennessee Star reported. He simply said “No.”

John Bryant for The Star said, “But a simple ‘no’ is hardly a definitive answer to a question that could come to the floor of congress with the bulk of the weight of the quickly Leftward shifting democrat Party behind it. The real question, which the GOP is right to ask is, will Bredesen sit idly by as his party abolishes ICE were he elected in the Fall, or will he actually actively oppose them?”

“Bredesen is still ducking the big question on this issue, certainly as far a Republicans are concerned.”

9 Thoughts to “Anti-ICE Protest Strains Nashville Police, While Bredesen Stays Quiet on Threat To City Where He Was Once Mayor”