It was a classic example of what President Trump would call the “fake news media,” which pretends to be impartial and neutral, clearly taking sides in favor of a Democrat and against a Republican.

Sabrina Eaton, a news reporter covering DC politics for the Cleveland Plain Dealer, tweeted Thursday about a Senate race she is covering in which she defended the Democrat, Sherrod Brown, while attacking the Republican, Jim Renacci. 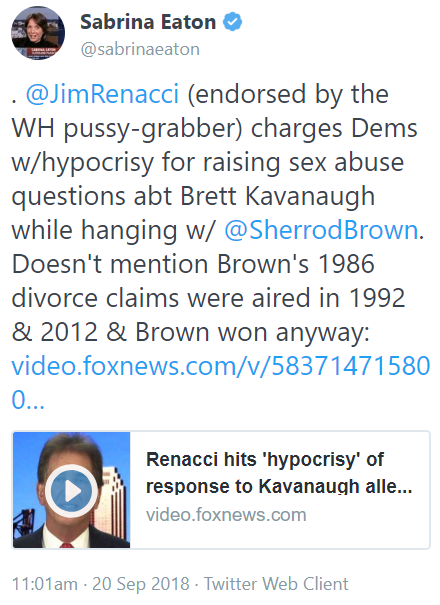 The two are pitted against each other in a race for the U.S. Senate. The Plain Dealer‘s reporter let the world know who she is rooting for with the following tweet, which she ended up deleting but not before we recovered a screenshot.

Eaton just could not help herself. She had to make a snarly comment attacking Renacci and Trump, while taking up for the Democrat incumbent Senator who has been in Washington for 25 years. She then deleted the tweet without explanation after receiving backlash from Ohio Republicans.

There was a time not too long ago when a reporter would have been fired for such an indiscretion. Now, they are apparently just told to hit the delete button and all is forgotten.

The whole snafu started after Renacci, in a Fox News interview, accused Democrats of treating the allegations against Judge Brett Kavanaugh differently than they have treated abuse allegations against Sherrod Brown, who was accused of domestic violence by his former wife, Larke Recchie, in divorce papers filed in 1986. She was forced to get a court-issued restraining order to protect herself from what she described as physical abuse.

“I am also intimidated by the Defendant and am in fear for the safety and well-being of myself and our children due to the Defendant’s physical violence and abusive nature,” Recchie stated in the motion for a protective restraining order, which the judged granted.

The fact that this reporter was forced to delete her tweet speaks for itself.

The vast majority of Ohioans have no idea Senator Sherrod Brown has extensive documentation, including affidavits, outlining multiple instances of domestic violence against his ex-wife because it has not been significantly reported on in the last decade. They are not aware that Senator Brown’s ex-wife asked for and received a restraining order against him because she was ‘in fear for the safety and well-being of myself and our children’ because of Senator Brown’s ‘physical violence and abusive nature.’ And they are not aware that Sherrod Brown violated that restraining order and was held in contempt of court.

Violence against women is no longer swept under the rug, as it has been previously, and it is important the people of Ohio are aware of Brown’s disqualifying conduct.”

But just because the complaints of abuse have been “aired” in the past by Brown’s political opponents, Eaton thinks it’s no big deal. Kelly reminded her that the allegations have never been aired in the national media or by congressional hearing.

Eaton then attempted to hit back at Kelly and justify her deleted tweet.

Partisan GOP recyclers are the only ones who claim it was "swept under the rug." They've unveiled nothing new since @SteveKoff's 2012 epic on this subject, save for their lack of ideas on how to defeat Brown. https://t.co/v8AAwrd2im

Kelly would have none of it and stood his ground, responding with more tweets:

An article that does not press Brown about the restraining order granted to his first wife because she feared him and claimed he was physically abusive on multiple occasions. Brown has never had to answer for his actions.

Eaton referred to President Trump as “the guy in your Twitter photo.” Kelly got the last laugh, with a biting tweet about Eaton’s deletion of the very tweet she was defending.

So was deleting your tweet an acknowledgement that journalists shouldn't show bias about a race they are covering? pic.twitter.com/uswbPQYayv

The Republicans are still waiting to hear if Eaton will be disciplined by the Plain Dealer. But don’t hold your breath.

In the bizarre world of anti-Trump media hysteria, maybe the so-called mainstream media no longer needs to hide their anti-Republican bias?

Even if Eaton’s argument were taken at face value, it does not negate her hypocrisy. Democrats think Kavanaugh should step down solely on the basis of a 36-year-old accusation against a teenage boy while they continue to ignore court-documented domestic abuse by Sherrod Brown and detailed allegations of recent sexual abuse by Rep. Keith Ellison by multiple women.

Gone are the days when news reporters at least tried to keep her opinions to themselves.