“In 1997, a United States’ congressman (Brown) said the biggest problem Ohioans have is they send people to Washington and they spend 20 or 30 years there and they forget about the people of Ohio,” Renacci said. “He is the 4th most liberal senator and that doesn’t represent Ohio. He votes for sanctuary cities, he votes for partial birth abortions. Ohioans don’t believe in that. He ran around with Hillary Clinton trying to bankrupt the coal industry. He voted 97 percent of time with Chuck Schumer (D-NY).” 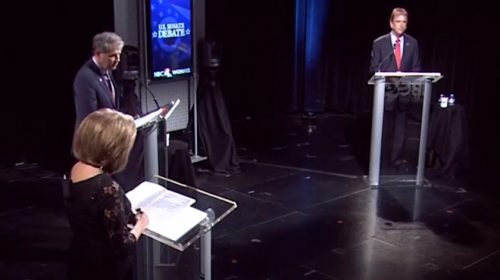 The two candidates traded jabs over the economy and whether the Trump tax cuts are helping regular middle-class Ohioans or just the ultra-wealthy.

Brown stated at least four times that the Republican tax-cuts only benefit the most wealthy Americans and that GOP leaders want to cut Medicare and Social Security to pay for the tax breaks.

Brown said three-quarters of the benefits from the Trump tax cuts went to the wealthiest 1 percent of the U.S. population.

Soon as that bill is signed by the president, the bill that three-quarters of the benefits went to the wealthiest 1 percent, Republican leadership immediately said that we need to cut Medicare and Social Security or raise the eligibility age to pay for it.”

You can watch the entire hour-long debate here:

“We have governments that give tax cuts to the wealthiest people and forget about helping struggling people, working families,” Brown repeated.

Brown’s comment was based on the rule, adopted by Congress during the Obama years, that if a bill increases the deficit, automatic cuts are required to offset the spending increase or tax cut, unless the House and the Senate agree to waive the requirements.

“They’re advocating we cut taxes predominantly on the wealthy and it’s paid for by more hardworking Americans because of cuts in Social Security and Medicare,” Brown reiterated.

But Senate Majority Leader Mitch McConnell and House Speaker Paul Ryan have both said they will waive any mandatory spending cuts triggered by the tax cuts. The hope is that the tax cuts, if given a chance, will end up spurring enough economic growth to bring more tax revenue into the treasury, not less.

Renacci said the cuts have already led to more prosperity among Ohio’s middle class, with an increase in the average take-home pay of more than $2,000 per household.

“The difference between myself and my opponent is the tax cuts are working, businesses are continuing to grow. My opponent doesn’t seem to be traveling the state and talking to the same people,” Renacci said. “I hear people come up to me all the time, thanking me because they say their paycheck is bigger. We need to continue to move our growth further and I support the tax cut because that is what will get us out of this deficit.”

Renacci does not deny that the U.S. government has a spending problem that also must be addressed, but he seemed to rule out cutting Social Security, Medicare or the military.

“I’m OK with a safety net and proud to take care of those in need and let the wealthy pay their own way but my worry is Nancy with two kids in the middle,” Renacci said. “We need to find a way to bring competition in so people aren’t priced out of the system.”

He said Lasik eye surgery is an example of how market competition can bring down prices.

“Again the senator is lying,” Renacci responded in regard to his position on pre-existing conditions. “He also talks about lobbyists which is amazing since he has received more than $500,000 from lobbyists.”

In many cases Brown has received contributions from some of the same lobbyists who work for the drug companies, Renacci said.

On immigration and deportations

Unlike some in his party, Brown said he was not in favor of abolishing Immigration and Customs Enforcement, or ICE, but wants to see it “reformed.” He said he opposes ICE raids on illegal immigrants who are “working hard and playing by the rules.” He said deportations should focus solely on aliens who commit violent crimes.

Renacci countered that any migrant who crosses into the U.S. illegally is already not playing by the rules.

“What the administration has done to rip children from their parents is immoral and just stupid policy. And Congressman Renacci has never talked to his friend in the White House about this,” Brown said.

Renacci said he has openly disagreed with President Trump about the separation of family members at the border.

“But let’s face it, the senator supports sanctuary cities, that is something Ohioans don’t support, and he supports no borders, that’s something Ohioans don’t support,” Renacci said. “I disagreed with our president on the families being separated, but at the same time, he’s saying give citizenship to all illegals just because they have a job. That’s why it is called ILLEGAL immigration. Let’s make sure we support a legal system, and reward that, not reward the illegal aliens.”

On abuse of women

A tense moment arose when Renacci asked Brown a pointed question related to the spousal-abuse allegations in Brown’s past.

“In December 2016 you asked then-Senator Al Franken to step down when it was substantiated there was a sexual issue. Do you believe any instances of domestic violence disqualifies a person from serving in public office?”

“I’ve answered that question numerous times,” said Brown, adding that his ex-wife “has told you to stop attacking our family. You should be ashamed of yourself.”

“Just because an offense has been forgiven doesn’t mean it didn’t happen,” Renacci responded. “We are talking about detailed documentation in court records. You can’t get a judge to give a restraining order if something didn’t happen. And he asked in 2016 for Senator Franken to step down. You don’t get grandfathered in on this. This race is about Jim Renacci and Senator Brown, and whether or not he should be disqualified. By the way, I know he has said Jim Renacci lied. Well, that means the judge lied.”

One of the moderators asked Renacci if he would apply the same standard to President Trump for Trump’s alleged marital indiscretions.

“This isn’t about President Trump. If that’s what you want to use in the 2020 race, then it can be used. But I am not running for president,” he said. “And I have said that anyone who lays their hand on a woman disqualifies himself for the Senate.”

On special-interest money in Washington

Renacci said the best way to clean up Washington is to eliminate dark money from PACs and implement term limits. He then pointed out that Brown has received $27 million over the years from special interests while at the same time calling for an end to such contributions.

“So I am all for term limits and limiting the money,” Renacci said.

Saturday night’s debate, in Columbus, was sponsored by NBC-4 and the Ohio Debate Commission.

The third and final debate between the two candidates for U.S. Senate is scheduled for Friday, Oct. 26, at Miami University.