COLUMBUS, Ohio – An Ohio man filed a lawsuit in federal court against the Ohio State Board of Education (OSBOE), the board president, and four board members.  The lawsuit claims the agency overstepped authority in passing a racial resolution and argues the plaintiff’s First Amendment rights of free speech and to petition his government for redress of grievances were violated when he was barred access to a public forum during an April meeting.

Daniel Regenold claims the OSBOE went beyond its authority under Ohio law when the agency passed a resolution last July – Resolution to Condemn Racism and to Advance Equity and Opportunity for Black Students, Indigenous Students and Students of Color.

On July 14, 2020 the Ohio State Board of Education embraced and adopted policies advancing Marxist ideologies of critical race theory and the false proposition of systematic racism.

The State Board of Education declared that it ‘shall require training for all state employees and contractors working with the Department of Education to identify their own implicit biases so that they can perform their duties to the citizens of Ohio without unconscious racial bias.

Regenold notified OSBOE that he planned to address his concerns during the public forum portion of the April 13 meeting.  However, Board President Laura Kohler nixed the request, based solely on the content of his suspected statements, according to the lawsuit.

As President, I made the decision in the late fall of 2020 to limit public comment on two issues, the Board’s Resolution to Condemn Racism and to Advance Equality and Opportunity for Black Students, Indigenous Students and Students of Color (which was adopted July 20, 2020) and the 1619 Project to written testimony only. – Laura Kohler

Critical race theory is an academic discipline formulated in the 1990s. Critics, including Battlefront public policy research center founder Christopher Rufo, say is built on Marxism.  The theory is that capitalism creates conflict between classes and the solution is a revolution that ushers in a new socialist society with the ultimate goal being revolutionary communism.

The 1619 Project, a New York Times series of opinion pieces and essays, attempts to revise history with one-sided, bias propaganda according to historians who provided feedback on the project.

As School Board of Education President, Kohler does have the authority to “impose limitations on public participation” but according to Regenold’s attorney Curt Hartman – who talked with The Ohio Star – those limitations are appropriate when the precluded topics are not germane. Hartman said that the resolution and 1619 Project are both relevant topics for discussion during the public comment portion of the meeting as they go directly to a policy formally adopted by the Board of Education or espoused on the website of the Department of Education

Meeting minutes posted to the OSBOE website contain information on public testimony given on the topics that are now off limits.  During meetings spanning September – November, more people testified against the board resolution and its racial policies. It was after the November meeting that Kohler began restricting access to the public forum.

Ironically, the contested resolution contains a section that states “the board will look for ways to engage our members in open and courageous conversations on racism and inequity.”

The lawsuit includes board members Meryl Johnson, Martha Manchester, Antionette Miranda and Christina Collins for their “explicit support, encouragement and ratification” of the policy to prohibit discussion on racial topics.

During the April meeting President Kohler said she considered lifting the moratorium but ultimately decided to restrict Regenold and a couple others – saying the idea of allowing public comment would have been a “misstep of proposing an idea that was half-baked, quarter-baked, not-baked-at all.”

During the meeting board members talked about Kohler’s decision.

“I’m using race right now and I don’t feel ashamed,” said board member Meryl Johnson.  She did not want to “sit [there] and listen to the kinds of speeches that we heard after the resolution passed.” If discussions on “critical race theory or 1619” were allowed, “It would no longer be a safe place for me.”

Member Martha Manchester said she was “in support of the action [Laura Kohler] took” in closing access to the public forum. She continued “the position Laura Kohler has taken is the right one for the Board.”

Board member Christina Collins said testimonies and comments would be “bringing in theories or words that are being misconstrued or supporting misconceptions.”

Included in the complaint for injunctive relief and declaratory judgment filed with the United States District Court for the Southeastern District of Ohio is a letter the plaintiff – who runs a tuition-free online school – sent to Governor Mike DeWine in March.

In the letter Regenold writes that he discovered a 1619 Project link on the agency website that “informs Ohio students that ‘the truth is that our Democracy…has been born on the backs of black resistance.  Black people have seen the worst of America.’” The letter states that President Kohler is fine with keeping the link on the site.

“I believe the School Board has become ‘Radicalized’ and is outside the norm of Ohioans,” wrote Regenold. “I urge you to mix up the school board to include more diversity of thought that truly represents Ohioans in a ‘color blind’ manner, and not divide people with a clear division along racial lines.

Two of the members named in the lawsuit – Kohler and Manchester -were re-appointed by Governor Mike DeWine.

The Ohio State Board of Education consists of 19 members – 11 elected, eight appointed by the Governor.  The resolution in question passed by a vote of 12-5 last July.  However, the board membership has changed since then due to the November 2020 election. 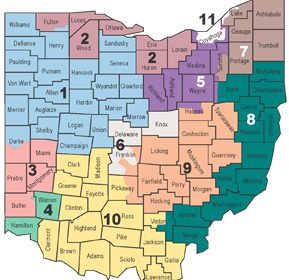 Martha Manchester was appointed to the board by Governor John Kasich in 2017 and re-appointed by Governor DeWine December 20, 2020 for a term ending in 2024. Manchester is a Partner and Office Manager for Manchester Farms General Partnership.

Dr. Antoinette Miranda was elected in 2016 to represent District 6 and re-elected in 2020.  She is a professor and Director of the School Psychology Program at The Ohio State University.

Dr. Christina Collins was elected to the BOE in November 2020 to represent District 5.  Currently, she is an adjunct professor at Kent State University in the Interprofessional Leadership Educational Doctorate program teaching Practitioner Inquiry.

Meryl Johnson represents District 11, was elected in 2016 and reelected in 2020. She is a retired teacher.

Board President Laura Kohler was appointed in 2017 by then-Governor Kasich and reappointed by DeWine for a second term ending in 2024. Kohler’s profile on the OSBOE site says she is “an advocate for equity, quality schools and effective community partnerships.”

Governor DeWine’s office was contacted for comment but did not respond by press time.