President Donald J. Trump’s one-time campaign manager, now advising James B. “Jim” Renacci’s gubernatorial campaign, touted a new internal poll in an exclusive interview with The Ohio Star that found the former congressman is leading Gov. R. Michael “Mike” DeWine in the race for the Republican nomination to be decided in the May 3 primary.

Trump is playing a major role in Republican voter preferences for the 2022 campaign, said Brad Parscale, who tracks Renacci’s messaging and other facets of the campaign, in an exclusive interview about the poll. 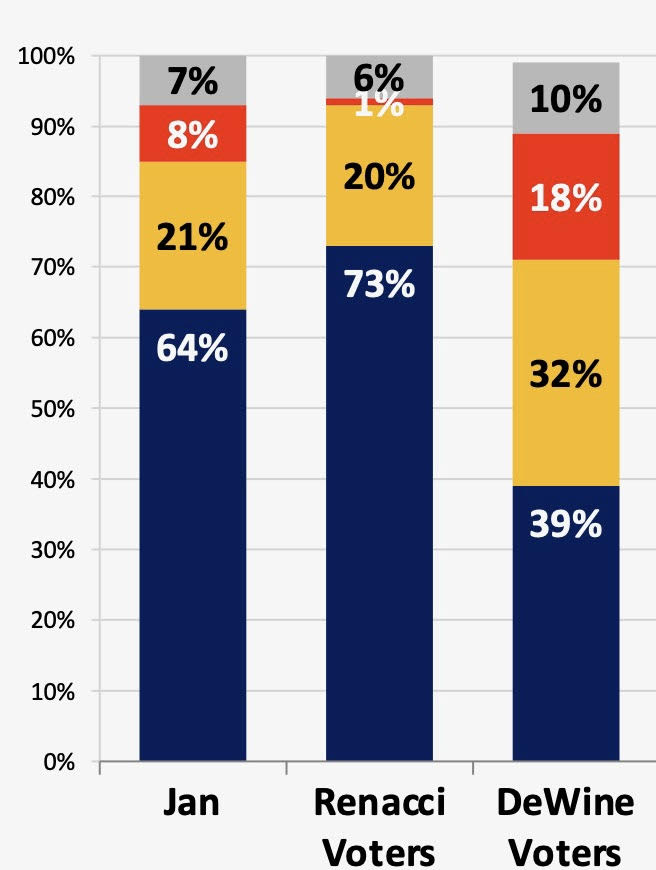 This dynamic is at play with how the Republican Primary Voters sampled feel about the handling of the 2020 presidential election – and whether Trump lost fairly or not.

The disparity is shown in this chart: Dark blue: Election was stolen; Yellow: Some fraud; Orange-red: No fraud; Gray: No opinion.

Parscale said: “The biggest question to ask Mike DeWine – to push him on is: ‘Does he think Trump won versus [he] doesn’t think he won.’”

A combined total of 93 percent of Renacci’s GOP supporters think the election was stolen from Trump or there was some fraud in 2020.

Only 1 percent of Renacci’s Republican supporters said there was no fraud.

“It’s the biggest, clearest difference between the two of them, and DeWine will not answer that question because if he says the election was stolen, he loses the 18 percent,” Parscale said. “If he says: ‘Not stolen,’ he gets the 39 percent, so he’s trying to ride the fence and not answer.”

Parscale, who has twice as many Twitter followers as the Ohio governor, said he is taunting DeWine through social media about his stand on how the 2020 campaign was handled.

“You’ll see that I’m trying to push him,” he said. “I said: ‘Do you agree, Mike DeWine? State it publicly that Joe Biden won without fraud and President Trump received a fair election. What do you say, Governor Mike DeWine? Do you think Joe Biden won legitimately?’”

So does @GovMikeDeWine believe that @JoeBiden won the election fairly? Ask him if he thinks Trump won but it was stolen? Why will he not answer the question? If he is so sure why does he avoid the question?

“On any kind of informed ballot, he’s winning by almost 30 points, even one question, the post-poll is plus 51-23 Renacci,” he said.

“As soon as you tell DeWine voters how he went against Trump, they split away from him three-to-one,” said Parscale. “You just remind them that Trump called him a RINO. You remind them that he was with Democrats, not Trump on COVID. You remind them of all his liberal policies. The voters dump off him as water runs off plastic – I mean, they just fall off him as soon as they’re informed – like plastic goes dry.”

Trump has strong support by GOP in Ohio. Anti-Trump @GovMikeDeWine is in serious trouble in his own Party. 89% Approval for Trump. DeWine only getting 32% of the vote from his own Party. Poll by @TonyFabrizioGOP n=800 pic.twitter.com/TFE5vumXi7

Only 3 percent of Renacci voters do not like Trump.

Twenty-three percent of DeWine voters do not like Trump.

This disparity creates an opportunity for Renacci to target the 50 percent of Trump-DeWine supporters with pro-Trump messaging, but if DeWine responds to this poaching of his supporters, he risks alienating his anti-Trump supporters.

Renacci: DeWine has a toxic history with conservative Ohio voters

“They’ve gotten to know Mike DeWine over 45 years,” Renacci said in an exclusive interview with The Ohio Star about the poll. “He’s a chameleon that changes depending on what position he is in.”

“Remember, the Republicans in Ohio also rejected him in 2006, after they saw what he had done in the Senate,” he said.

In the 2006 contest, DeWine lost his Senate seat to then-Democratic Rep. Sherrod C. Brown with 44 percent of the vote to Brown’s 56 percent. It was the first time a Democrat won an Ohio Senate seat since 1992.

Renacci, who served on the House Ways and Means Committee during his Capitol Hill tenure, said voters recognize his double-game.

“Here’s a guy who runs to the right in a primary, shifts back to the center in a general election, but then moves far left and governs from the left,” he said.

“They saw that in the Senate, in the House when he was there,” he said.

“I mean, here’s a guy that has a 99.9 percent name ID, so they know him, and they decided to give him another opportunity after he became the attorney general,” he said.

DeWine was elected Ohio attorney general in 2010, and he was re-elected again in 2014, before his run for the governor’s office in 2018.

“This guy, as I said, is a sharp political person,” he said. “While he was the attorney general, he did some things to make conservatives happy. They gave him another chance in 2018, but now three, four years later, they’re looking at him and saying, wait a minute, this is not the Mike DeWine we voted for.”

Parscale: Poll shows Renacci is building up his lead over DeWine

The poll was conducted by Trump’s pollster Tony Fabrizio and his firm, Fabrizio Lee, between Jan. 11 and Jan. 13 with 800 Republicans with cell phones, landlines, and text messages. Live operators were on the cell phone and landline calls. The poll carries a margin of error of 3.46 percent.

That 19 percent who never heard of Renacci was more than the 18 percent of respondents with an unfavorable opinion of the former congressman.

Fifty-two percent of respondents said they disapproved of DeWine, putting him 12 points underwater.

He said that the governor is in a situation where he cannot do anything to improve his approval because the Republican Primary Voters have already made up their minds.

“Ohioans are still very angry at DeWine for his anti-Trump, pro-shutdown policies, Republican pollsters have told me this is some of the worst polling they’ve ever seen for a Republican incumbent,” he said.

Renacci said the poll proves that Republican voters are done with DeWine.

“In the poll, only 32 percent of Ohio respondents said they would vote for DeWine, and that is a really bad place to be when you are a sitting Republican governor,” Parscale said.